Forming a bridge between the US and China has seemed to be a formidable task. With heavily criticised film projects such as The Great Wall and a looming trade war threatening to erode economic partnerships, the Sino-American relationship has been through its fair share of rocky waters.

“I am more than happy to continue being a part of creating successful international collaborations and partnerships,” the actor tells me over a pint of the black stuff in his local London pub. “The US and China are both “home” to me, and I am excited to continue to be a part of bringing these two influential industries together.” 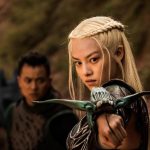